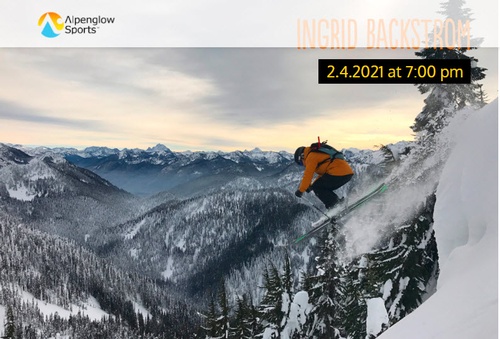 Five times per winter, a premier outdoor athlete presents an inspirational tale of adventure, creating a forum for motivation and inspiration. Every show is free. This season, due to the global pandemic, all shows are virtual and will livestream to you at home.

Raffle and bar proceeds in conjunction with anonymous donations, raise more than $50,000 per show for local non-profit organizations. To date, WSS has raised over $500,000, making a tangible difference in North Lake Tahoe and beyond. The much loved raffle will take place virtually this year with tickets for sale upon registration and winners announced during the livestream show.

Ingrid Backstrom, an extreme skier of international fame, established herself in Matchstick Production’s 2004 Yearbook, was the only female to be featured as one of Powder Magazine’s Future Big Mountain Heroes in 2002. She has also won the prestigious awards for performances in ski films including “Best Female Performance” and “Breakthrough Performance” at the 2005 Powder Magazine Video Awards. Backstrom resides in Washington with her husband and young daughter and her show “Little Big Mountain Skiing” will depict a few of her best trips and ski lines, followed by the transition of a continuing ski career while becoming a mother.

The 2020-2021 Virtual Winter Speaker Series is livestreaming to you at home. All shows are free of charge and all ages are welcome. The much loved and anticipated in-person raffle will take place this year in a virtual capacity with tickets available for purchase at online registration and winners announced in real-time during the show.

Proceeds from Ingrid Backstrom’s show will benefit the Tahoe Fund. The Donor Party, the anonymous philanthropic arm of the Winter Speaker Series, will supplement the funds raised via the raffle.

The goal of the Tahoe Fund is to become a major source of private funding for environmental projects around the Lake Tahoe Basin with an emphasis on forest health, lake clarity, sustainable recreation, transportation and stewardship. The Tahoe Fund acts as a catalyst for bridging the funding gap between the existing environmental needs and the continued decline in public funding for Lake Tahoe.