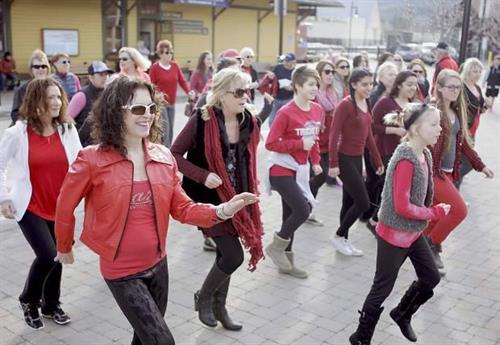 This Valentine's Day, grab a friend and join Tahoe SAFE Alliance to represent Truckee/Tahoe in the annual One Billion Rising International Flash Mob!

One Billion Rising is the biggest mass action to end violence against women in human history. Launched on Valentine's Day 2012, One Billion Rising (OBR) began as a call to action based on the staggering statistic that 1 in 3 women on the planet will be beaten or raped during her lifetime. With the world population at 7 billion, this adds up to more than ONE BILLION WOMEN AND GIRLS.

One Billion Rising is no longer just a campaign--it is a way of life that encourages activism as a daily practice. It is not one day that we rise, but every day that this consciousness must rise in all we do.

We call on activists this year to be braver, go deeper, reflect, study, listen, learn, awaken to what you don't know, ask the difficult questions, engage, take actions, and push yourselves out of your comfort zones physically and intellectually. We call on you to commit to resistance and solidarity!

This is Truckee/Tahoe's 5th year participating! Wear your dancing shoes and something red (or whatever makes you feel bold/great).

You can learn the dance in-person prior to the flash mob at InnerRhythms Dance Studio on Sunday, January 27th at 5PM AND/or Sunday, Feb 10th at 1PM, 12047 Donner Pass Rd., Suite B6, Truckee, CA.

Or learn it online at:  https://www.facebook.com/onebilliontruckeetahoe 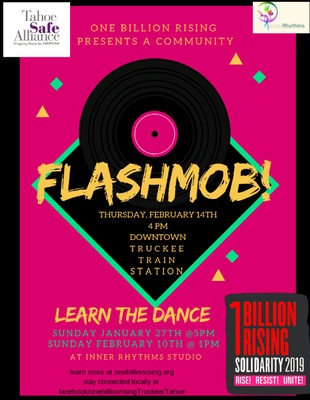 Contact Information:
Hillary Abrams
Send an Email
Fees/Admission:
Free and everyone is invited!
Set a Reminder: