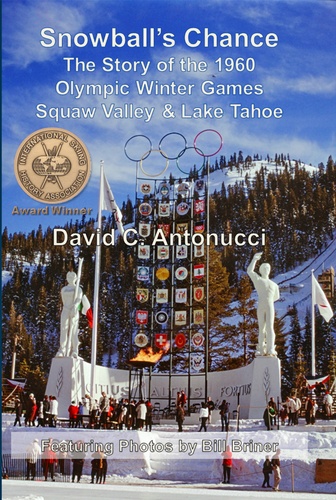 Event Description:
David Antonucci’s book, Snowball’s Chance: The Story of the 1960 Olympic Winter Games, is the basis of this presentation. Winner of the 2009 Ullr Award from the International Skiing History Association, Snowball’s Chance is the first book devoted solely to chronicling the historical events at Squaw Valley and Lake Tahoe.

Antonucci, a Tahoe local, will inform the audience through numerous illustrations about the VIII Olympic Winter Games that took place in February 19-27, 1960. Six hundred and sixty-five athletes from 30 different countries in a world locked in an epic Cold War gathered to compete in five recognized Olympic winter sports, sharing the spirit and ideals of the Olympic movement. Considered the first of the modern-day winter Olympic games, this interactive talk will feature rare stories and photos. “One of the fascinating things you will learn is the extensive pageantry and artistic expression of the opening and closing ceremonies produced by the legendary Walt Disney!” says Antonucci.

Doors open at 5 pm with the program beginning at 5:30 pm. There is a suggested $5 donation to attend and the State Park parking fee is waived for the evening. Refreshments available and book signing will occur after the presentation. Seating is limited. Come early to visit the exhibits and peruse the fabulous park store.

Autographed copies of David Antonucci’s award-winning book, Snowball’s Chance – The Story of the 1960 Olympic Winter Games, will be available for purchase at $16 each. The 198-page book includes 83 photographs by official photographer Bill Briner and others showing historic Olympic ceremonies, venues, and athletes in the heat of competition.